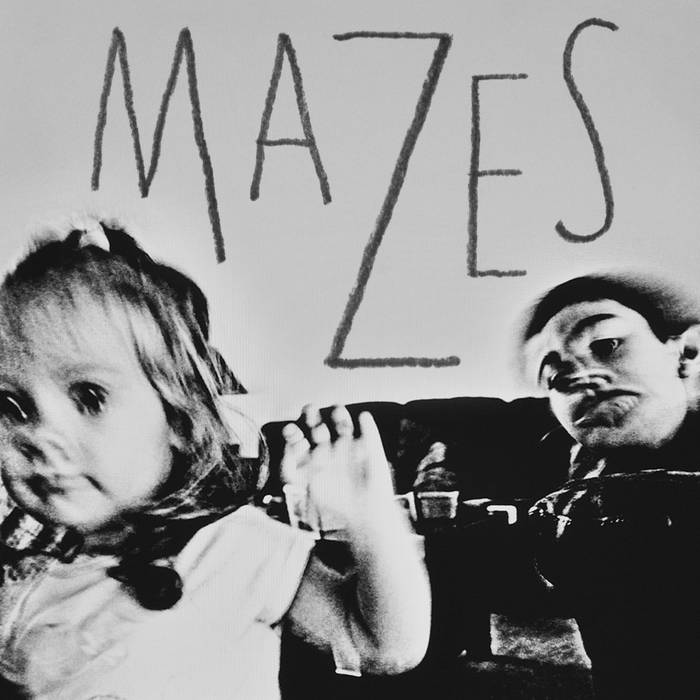 The result of sessions that took place on an old lightship moored on the Thames, April 11th 2011 saw the release of Mazes’ debut album; ‘A Thousand Heys’. The band (formed of Jack Cooper on vocals and guitar, Neil Robinson on drums, Jarin Tabata on guitar and Conan Roberts on bass) admit that the time spent in the boat represented the first time that they were able to concentrate on their performances during a recording session, rather than, as Jack puts it, ‘pressing record and then running over to our instruments to play.’ This relative liberty has allowed Mazes to focus on creating an album that captures the refreshing spontaneity and looseness that characterised their 30-track Italian Beach Babes mixtape, whilst simultaneously refines the sharp instinct for a pop hook that can be found in their back catalogue of 7”s and splits.

Mazes formed in Manchester in early 2009 and began their life touring with Pens and Wavves before going on to share stages with bands such as Deerhunter, Thee Oh Sees, Sic Alps, Dum Dum Girls and Crocodiles. Whilst these bands are peers and contemporaries, Mazes are not an act swayed by fashion or influenced only by what is happening immediately around them. “A Thousand Heys” is a tapestry of collective influences that draws on the band’s multi-national constitution (Jarin is from the US, Neil from New Zealand) and sees them dart in and out of their record collections with the same enthusiasm and sense of fun as the two wide-eyed kids messing about in front of the camera on the album’s cover. The opener ‘Go-Betweens’ is a song influenced by the honeyed, major-key pop of the band the song’s title references, but with New York Dolls guitars, Buzzcocks intensity and Big Star-esque nihilist lyrics. At other times, as referred to by Marc Riley when he called them a ‘sort of really garagey Kinks’, they can sound like a British Invasion group; a syncopated McCartney bassline kicks in during a chorus that starts with a ‘Hey!’ on ‘Surf & Turf’, with lyrics that actually reference ‘The Beatles at JFK’.

A band that has been extensively covered on the blog scene, much has already been made of Mazes’ ability to juxtapose measured three-minute pop songs with short bratty blasts. Although there is no ‘Painting of Tupac Shakur’, the thirty second thrash punk song found on their split with Spectrals, songs such as ‘Till I’m Dead’ prove they can still shred when they want to, whilst ‘Eva’ references the aforementioned IBB mixtape in sounding like a sketched out idea, a fleeting moment in time recorded for posterity. Conversely, the Dunedine Sound influenced ‘Cenetaph’ is a beautifully controlled pop song that demonstrates the band care more for songcraft than correct spelling, whilst ‘No Way’ recalls early REM.

Perhaps the most thrilling moment on the album is when Mazes combine these two elements in the shape of lead single ‘Most Days’. In under two minutes the band encapsulate their sound with a driving pop song full of hooks and sugared melody that makes way for a frenzied ending of flailing guitars and crashing drums, the lyrics somehow simultaneously capturing both the recklessness of youth and the terror of mortality in about three lines. Throughout the album Jack Cooper proves himself to be a versatile vocalist, able to recall the impassioned yelp and ‘oohs’ of James Mercer in one instance, and the sigh of Elf Power’s Andrew Rieger in the next. The lyrics on the album display a similar range, from the idealised childhood and subsequent collapse into post-adolescent apathy of ‘Summer Hits/ J&J Don’t Like’, to the vivid vignette of ‘Cenetaph’, the youthful forcefulness of ‘Death House’ to the Swell-like world-weariness of ‘Wait Anyway’.

Credit must go to studio engineer, producer and owner of Lightship 96 Ben Phillips, for the way in which he has captured these various aspects of the band’s personality whilst overseeing an album that feels controlled and focused. He has also paid respect to the lo-fi tradition of the band which, whilst enforced by circumstance, added to a sense of abandon in Mazes’ more frenzied songs and gave a cloak of intimacy to some of their quieter moments. “A Thousand Heys” recreates this sense of unadulterated excitement and natural analogue warmth, but the freedom of recording in a studio has allowed the band to explore further sonic territories. This is most notable on the track ‘Wait Anyway’, which includes a guitar duel in the mid-section reminiscent of a Televisions’ Verlaine/Lloyd stand off and closes with an extended jam replete with a crushing bass riff and a wail of guitar feedback that is the heaviest thing Mazes have recorded yet.

Mazes have demonstrated a real appreciation of the D.I.Y ethos and sense of community amongst their peers that so many of the acts they admire embraced. Jack runs Suffering Jukebox whilst Conan, also a member of Graffiti Island, runs Italian Beach Babes, labels that are very much a part of what makes the UK scene so vibrant at the moment. Mazes join a growing list of Fatcat artists who have been actively involved in a D.I.Y scene which includes artists as respected and influential as Animal Collective, Black Dice and No Age. With such excitement growing about the release of “A Thousand Heys”, it seems Mazes are in good company.

Bandcamp Daily  your guide to the world of Bandcamp